A block heater is a device which plugs into a standard wall outlet that heats an engine through the oil, coolant or the block itself.  Block heaters don’t typically come with gasoline powered cars in the lower 48, but there are benefits to using them even when they aren’t strictly necessary to start the car.

Economy – Cold engines use much more fuel than warm engines.  Using a block heater greatly reduces the time your engine will spend at an elevated idle.  Also, by not idling the car in place each winter morning, savings are further increased.

Longevity – Cold starts are rough on a car and some experts claim a majority of engine wear occurs in this state.

Emissions – Fewer pollutants are produced  by starting on an already warmed up engine.

In short, a warm engine is a smoother, more efficient, longer lived, cleaner and happier engine.

This post details the process of installing Subaru’s OEM block heater.  This is a 400 watt element which replaces a threaded plug on the right side of the engine block.  This plug blocks off a coolant passage, so the heater will be in direct contact with the coolant.

There are at least two OEM part numbers that will fit: 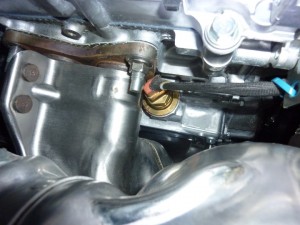 The straight plug on the A0910AS100 is close to the exhaust manifold flange.

I bought the straight-plugged AS model before I was aware of the SFJ model, but in hindsight, I would have done the same.  As far as I know, there’s no difference between the heaters except for plug orientation.

I can see why Subaru recommends the SFJ heater.  The clearance between the orange plug and the exhaust manifold flange is small, and they could make contact if the heater is rotated a certain way. The solution then is to tighten the heater until it faces a direction where the plug won’t touch the flange.

Since the car will be undriveable through much of this procedure, make sure you have all of these items before starting:

-Replacement coolant (if you make a big mess)

-A clean container and funnel to catch coolant

1.  The first step is to make sure the engine is cold, disconnect the battery and raise the front end of the car.  Always use jack stands and never rely on a jack. 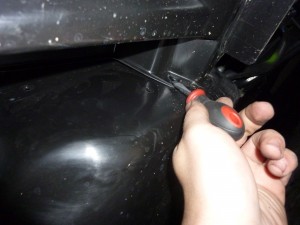 2.  Next, drop the plastic belly pan from the car by removing four bolts and six snap fasteners.

3.  Disconnect the oxygen sensor wire harnesses so they won’t be pulled when the manifold is lowered.

4.  Now the exhaust manifold must be unbolted from the cylinder heads.  It’s not necessary to remove the manifold from the downpipe, but you can do this later if you need more clearance.

5.  Next, position your clean container and funnel under the radiator petcock and drain the radiator.  If you want to speed things along, you can remove the radiator fill cap. 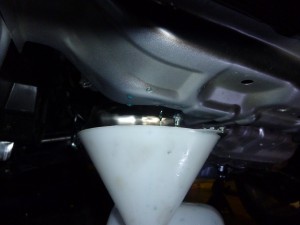 6.  The plug in the side of the block must now be removed.  It takes a lot of torque to break this plug free, so you’ll need that 14mm hex socket/allen, and possibly a combination of wrenches, breaker bars, etc to apply the torque. You may have to combine tools to get the job done.

7.  Once the plug is removed, test fit the block heater with its plug in the block.  Also test fit the exhaust manifold.  You can keep it in place temporarily with a nut on either side.  Find an orientation for the heater where the plug does not contact the manifold flange.  Mark the position of the heater against the block with a Sharpie.  Put a second mark on the heater 180 degrees from the first.

8.  Lower the exhaust manifold once again and begin preparing the heater for installation. 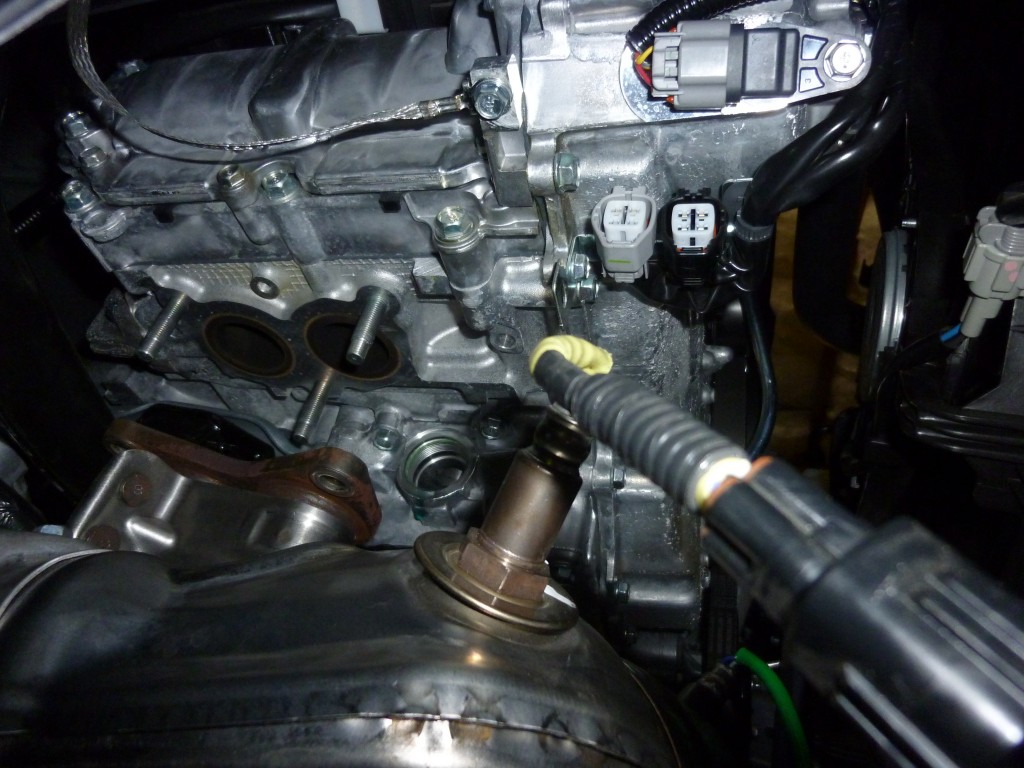 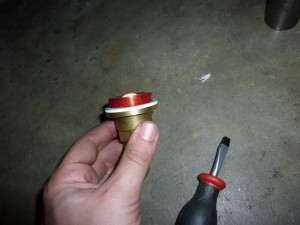 9.  Apply sealant to the threads of the heater.  I prefer using anaerobic, since there’s no danger of any excess hardening in other parts of the engine, but appropriately rated RTV will
work as well.

10.  Begin threading the heater into the block.  Tighten further with a 27mm socket.  Subaru’s instructions call for 25-35 lb/ft of torque, so aim for that window while keeping the heater in alignment with the marks you’ve made. 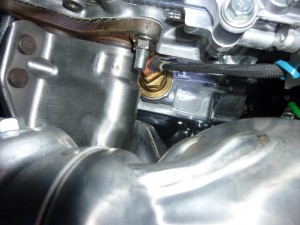 11.  Attach the cord and use zip ties to route it to the grille while avoiding the manifold and other hot surfaces on the engine.

12.  Install the exhaust manifold while double checking the clearance between the orange plug and the manifold flange.  Also reconnect the oxygen sensors.

14.  Install the belly pan.  Wait the period of curing time recommended by the sealant you used.  Anaerobic should set well within an hour.

15.  Add the drained coolant back into the radiator and leave the cap off.

16.  Run the the engine for a few minutes, allowing the cooling system to burp out any air pockets.  Add more coolant if needed.

The block heater is now ready for use.  Enjoy!

The block heater is capable of bringing the engine temperature to about 70F over ambient after two hours.  At this point, the temperature levels off.  Leaving the heater plugged in over night is a waste of energy.  I recommend using the block heater with a digital timer.  Set it to run for 90-120 minutes before your morning commute for the most efficient heating.

If you’re heating the engine while the car is in a relatively warm place, like a garage, it’s possible for the engine to reach 120F or higher.  This is not dangerous to the engine, but when starting at above 120F repeatedly, the ECU will assume the coolant temperature sensor is defective and will set a check engine code.

With an OBDII scan tool, you can clear this code and continue driving normally.  Also, you can determine how long to run the heater before reaching 120F.  If you don’t have a scan tool, the blue temperature icon in your gauge cluster will tell you when the engine is below 120F.

Over a ten mile trip, I’ve noticed a 2 MPG increase by using the block heater.  Longer commutes will show less of an increase since the engine will spend more time at normal temperature.