Both 12v outlets on the Impreza are switched with the ignition, so they’re only powered when the car is.  It’s convenient to have an outlet powered all the time.  For example, you can charge a cell phone or a GPS unit overnight, or while you run into a store.

You might be thinking we’re about to unbolt the center console, but you’d be wrong.  This is a simple and cheap modification that can be done entirely through the fuse panel!

-Heat source for the shrink tubing

-One mini fuse (dead or alive) 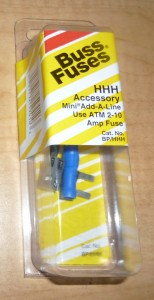 The Add-A-Line adapter (AAL) is going to draw power from the same source as the power door lock system.  Why the power door lock system?  Because it’s always on, even when the car is not.  The AAL has two sockets for a fuse, one for the original load and one for the new load.  The output for the new load will be routed back into the fuse panel, on the load side of the outlet fuse socket.

First, we must break open the donor fuse because we’re going to use one of its blades as a connector to feed power back to the fuse panel. 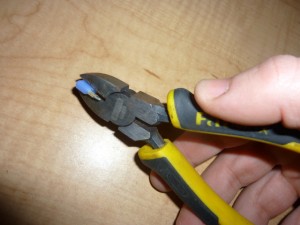 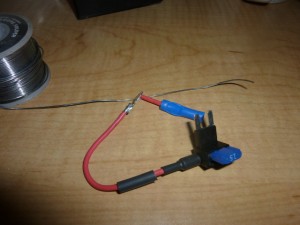 The locking system’s 15 Amp fuse is inserted in the socket closest to the AAL’s blades.

Cut off the bullet connector that came with the AAL, pass a length of shrink tubing over the wire and solder the wire to the donor fuse blade.  After this, use your heat source to shrink the tubing around the solder.

First insert the single blade end (on the left) into the upper connector of the 12v outlet’s fuse socket.  Then insert the AAL into the locking system’s socket as shown: 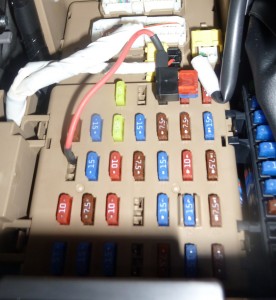 The orientation of the AAL is important.  The AAL draws power from the lower blade, passes it through the blue 15A fuse and returns it through its upper blade to the locking system.  From the same lower blade, it runs through the red 10A fuse and sends power to the upper load-side socket of the power outlet circuit.  The lower fuse socket is switched power where the 12v outlet would normally draw its power from.

If the AAL must be removed, pull it out of the locking system’s socket before pulling the wire from the outlet’s socket so that there’s no danger of shorting the exposed wire against something.

At this point you should have a constantly energized center console outlet, enjoy!


« Reasons to not buy an Impreza Fiberglass subwoofer box »